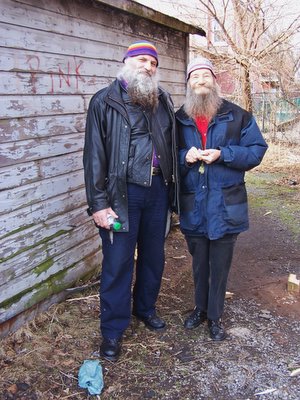 church of the universe founders michael baldasaro and walter tucker were back in the news today. a neighbour was tired of illegal activity in the alley beside his bristol street home, so he decided to fence it off. this didn't sit well with the brothers; they wanted to reclaim the public space, so they hacked it down. the neighbour caught them "red-handed" and a confrontation ensued. brother michael was shoved. he says his shoulder and back are sore. "he's 6'4" and 250lbs", the neighbour told a reporter. "I'm 5'6" and 185 lbs".
"he pushed me with all the force he could muster", brother michael told the same reporter, "he's huge. small, but huge".
Posted by Maggie Steele, owner Randy Steele Photography at 10:53 PM