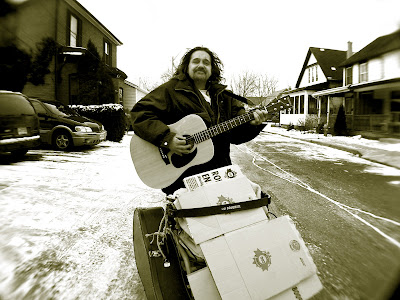 gary has some great stories. I met him where you see him: right in the middle of the road. originally from "the rock", gary left newfoundland behind for the lure of hamilton. he's pushing everything he owns on a small cart. gary tells me his wife left him two months ago; she took the dog and the guitar. "that sounds like a country & western song" I told him. gary says his church collected enough dough to buy him a replacement axe--that's the mann he's holding here. a new puppy is on the way anyday.