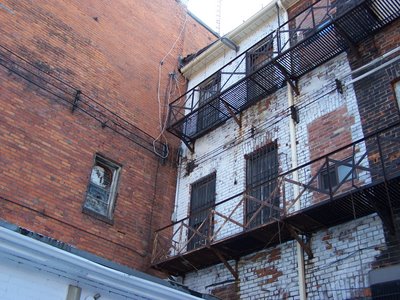 police are still guarding the building to the left around the clock, more than a week after the province seized it. new legislation allowed the move; the building has been home to two murders and numerous drug calls for police over the years. next week, the ontario government will go before a court to argue that the owners should lose the building for good. downtown merchants couldn't be happier.
Posted by Maggie Steele, owner Randy Steele Photography at 7:33 PM

Where's this building? Obviously it's downtown but what's the address?

it's 193 king street east, formerly known as the sandbar. take a drive by, you'll notice the cruiser parked in front...